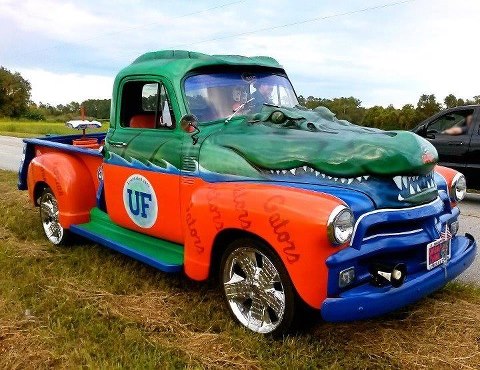 After two very hard fought Victories on the road with a complete defensive shut down of the opponent in the second half, we are now headed back home to face an unassuming challenger in the Kentucky Wildcats.  We’re hearing all this talk about hanging “half a hundred” on the Wildcats by our offense.  Not sure that anyone realizes that we’ve only done this six times in 62 meetings….and we’ve only had one half out of six where our offense clicked.  I’m all for scoring more points, but let’s not put the cart before the horse.  Let’s talk some football…

Kentucky was beat by a very bad Western Kentucky Team last week that was absolutely pummeled by Alabama.  So as logic dictates, we will now score 187 points on Kentucky.  Let’s take a closer look, shall we.  Kentucky has running attack that is minimal compared to Florida’s at this point and they rush by committee with Jonathon George leading the way last week and Raymond Sanders leading the team overall.  Regardless, they put up only 44 yards rushing against WKU.  Their QB, Maxwell Smith, on the other hand is quite prolific and has spread the ball around to 11 different receivers and has almost 1000 yards passing to date.  If you are not keeping track that’s about 500 more than we have.  They have also tallied 30+ points twice this season…which we’ve only attained once.  I will not-so-quietly point out that we played horrible in our one game at home this season.  OK, in all reality we win this game, but I can’t buy into the talk about hanging half a hundred on Kentucky until I see us be more consistent on offense…and defense.  Let’s face it our first halves this year have not been impressive….and we’ve brought serious firepower to our Kentucky games before and almost got beat (1991 Shane Matthews leads a late TD to secure a win and the SEC against a UK team that down 28 points in first quarter only to trail 28-23 in the 4th, Wuerffel to Doering, Chris Leak‘s 21-point deficit come from behind Victory in the 4th quarter, 2007 where we matched TD for TD and no defense was played in a 45-37 game, etc).  We’ve had the blowouts as well, but like I said, we had the firepower.  We appear to have firepower this year…but this jury is still out until I see more.  We’re still gonna win, though.

The second half against UT was good for the Gator collective.  We are beginning to see the development of this Gator team.  The defense seems to be further ahead of the offense at this point, but neither has put together a complete game this year.  That’s really what I would like to see from the defense this week.  Kentucky is more or less one dimensional.  Our secondary needs to step up and shut down the Wildcat passing attack.  We were able to do so for a half against UT, but I’m looking for the the “Package, Total T!” (read: The Total Package) this week.  I’m not concerned with 50 points, I’m looking at ZERO as in a shutout this week.  If our defense is getting better and playing better as a team then that’s my goal for this weekend.  We will win this season with our defense shutting the other team down and putting our offense in a position to have more scoring opportunities.  The letdowns in the past have come as a result of big games played before and after the UK game.  We had a big game last week and a big one next week—regardless we have to focus on THIS week.  Strangely, I was at all the games I mentioned in the paragraph above, so no worries this year, as I’m 7000 miles away from this weekend’s game.  I going all in on the defense this weekend and just looking for a great game running by Mike Gillislee and adding positive numbers to our turnover ratio (currently at +3).  Florida 35  Kentucky 0.  Game time is 12:21pm EST, 9:21am PST and 7:21pm here in Kuwait, so it’s breakfast on the west coast and a reasonable time here in the Middle East. I hope you are joining your local Gator Club where a 26th straight Victory over the Wildcats is best served with Gators!  ‘Nuff said.

1 thought on “Not So Wild-Cats”

The Give and Get